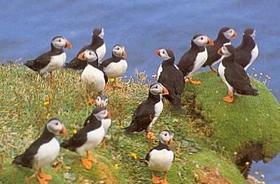 Inspired by a good Welsh friend – and despite all well-meant scepticism of our friends - Melisande and I decided to spend our summer vacation in Wales. Wales is a land of history, myths and legends, heroes and magicians, stone-age relics, medieval castles, Celts and druids. Wales is also a land with unpredictable weather, friendly smiles, homely pubs, greeting policemen, and unpronounceable village names (… "just turn left at the road to the village with double „l‟ on the way to "Eglwysdyffryn something").

Our carefully chosen route took us from Cardiff in the Southeast via the West coast to the North of Wales. Looking back now, it is however more advisable not to plan any itinerary but just to follow any whiff of a sunray when travelling through Wales…

After seriously scaring a few local drivers while steering on the right hand lane for a few days, we abandoned this type of „pleasure‟ very soon.

The road all the way through the „Black Mountains‟ to „Brecon National Park‟ led us via single-lane paths with occasional narrow recesses, which can be life-saving in the last minute in view of speeding local buses. While travelling on one of these narrow roads, one should not be too concerned about the possible loss of outside car mirror.

After visiting an indefinite number of small towns, castles and all of the souvenir shops, we became more professional in walking through the main pedestrian area within a few minutes and spotting all souvenir shops easily – and not without eagerly responding to the friendly greetings of policemen – until we got to Merthyr Tydfil…

We had returned to the car park from another castle and another English pub meal, when we unexpectedly spotted a lucent yellow ticket glued to the car window. Still inexperienced in recognizing tiny English coins, my blame was that I had thrown only 35 Pence into the ticket booth instead of the 40 Pence needed to acquire the desired 1.5 hours of parking endorsement. The punishment consisted of chipping in another pound, coupled with the requirement to immediately present the spat-out receipt to the City Council. A journey through a labyrinth of buildings, all belonging to the city council, followed which ended after another 20 minutes at the correct teller.

The "officeress" nodded thoughtfully, in spite of my mumbled aggrieved comments on the supposedly too strict treatment of harmless tourists, confirmed the payment, and discharged me with the well meant words: "We hope that you will keep Merthyr Tydfil in good memory…". While all this occurred, Melisande was waiting at a no parking area.

We made a stopover in Ammanford on the way to Carmarthen. The town is not particularly picturesque; it is simply the home of my Welsh friend and his 80-year-old father, who immediately and enthusiastically accompanied us to his favourite local pub. During the previous few days, we had quickly adjusted to the strict pub closing regulations in Wales (and Britain for this matter) by simply arriving at the pub at 8.30 pm so we would slumber in our beds already at 11pm.
In Ammanford, however, due to our personal relationship with one of the elders of the town, these pub regulations were set completely aside, and we were able to chat away with the local school headmaster and others until 1 am, with doors shut.

It is worth mentioning that a visit to Wales will require special skills for successfully managing overnight stays at local B&Bs. It is advisable to pull all cords that are dangling from the ceilings, immediately after entering the premises, to make sure you understand all the functions they can serve, well ahead of bed time.

Cords of this sort can serve a variety of purposes. They may lighten the room, start the water heater in the shower, and – at times – also flush the toilet. Unfortunately, there are usually no cords that bring about a butler who serves a cup of tea.

The aspiration to simply open a window, handle water taps and shower heaters - at times - requires tremendous in-depth knowledge, as you are faced with once again different kinks, buttons, and nipples. You wonder if the EU harmonization policies will ever be able to tackle this phenomenon.

Following eight days of travel on sleepy country roads, surrounded by grazing sheep on both sides of the road, one may easily become bored. In such a case, it is suggested to play the "scare a sheep" game. A short touch on the horn triggers aghast „faces‟ of the sheep, and produces quite an amusement for the driver.

After all these adventures, a lazy day in Caernafon is quite relaxing, when you can simply write postcards (Melisande), send emails by mobile phone (me), chat with English people, who like the Welsh climate but rather prefer it without the Welsh, and with Welsh people who would rather have their lands to their own.

All in all, the innumerable loose contacts with park rangers, guests at tea and coffee shops, owners of B&Bs, pub guests, and the associated portion of dry humour will compensate you for "a few rain drops".